What is Earth Day?

Besides being our favorite day all year, Earth Day is a global holiday that celebrates one very important thing: our planet. It also marks the birth of the modern environmental movement back in the 1970s – a time where environmentalists were labeled “tree huggers” or “hippies”, and the concept of sustainability was all but drowned out by the desire for economic growth.

Although most of America (and the world for that matter) was not tuned into the changing needs of our planet, environmentalists like Rachel Carson began to set the stage for the modern sustainability movement we recognize today. Her New York Times Bestseller Book, Silent Spring, was released in 1962 and wrote on the negative impacts of chemical insecticides on animals, habitats, and humans as a whole. Although it focused specifically on the chemical pesticide DDT and bird habitats, it began to raise public awareness around all types of pollution – and the way we treat our planet as a whole. 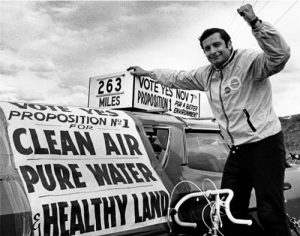 Silent Spring, in addition to major environmental crisis like the 1969 oil spill in California, inspired then U.S. Senator Gaylord Nelson (with the help of his friends!) to create an event that celebrates the grassroots enthusiasm for the planet he was witnessing, and fuses that enthusiasm with national policy initiatives. After a year of planning, on April 22, 1970, Earth Day took the world by storm as 20 million Americans hit the streets and public parks to rally for what they believed in. Various groups from all walks of life came together to rally against oil spills, polluting factories and power plants, toxic dumps, pesticides, freeways, and the extinction of wildlife and biodiversity – and left the first Earth Day with a much larger community they realized they shared values with. And so the modern environmental movement was born!

By the end of 1970, the enthusiasm around Earth Day led to the creation of the United States Environmental Protection Agency (EPA) and the Clean Water, Clean Air, and Endangered Species Acts. Woohoo! Simply because of passionate grassroots activists some major environmental  policies were enacted that we still have in place today. But the power of Earth Day didn’t stop there.

Flash forward to 1990. A group of prominent leaders in environmental advocacy wanted another big push around Earth Day to rally not just America, but the entire world! They called on Denis Hayes, co-coordinator for the first Earth Day, to serve as international chairman and spread Earth Day with everyone. With his help, they mobilized 200 million people (mostly grassroots activists!)  in 141 countries and focused on important issues like recycling and the 1992 United Nations Earth Summit. This was a hugely successful campaign, and by 2000, they knew that Earth Day was a rapidly growing global force that had the ability to create real change.

In 2000, Hayes wanted to combine the excitement and passion he saw around the first Earth Day back in 1970, with the hands-on activism and involvement from the 1990 Earth Day. The campaign focused specifically on global warming and clean energy, sending a clear message that citizens across the planet wanted meaningful action from their leaders on these issues. About 5,000 environmental groups across 184 countries teamed up with millions of activists (both online and in person!) to rally for this cause. Hundreds of thousands of activists collected on the National Mall in Washington D.C. for a First Amendment Rally. A drum chain traveled from village to village in Gabon, Africa, to celebrate. The message from the entire world was clear that Earth Day: we need to protect our planet, and politicians better step up to help us. 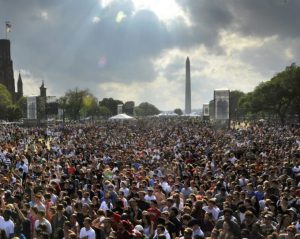 By 2010, Earth Day was a well-known holiday…. But the environmental issues that faced us were becoming more severe than ever. Issues like climate change (and climate change deniers), oil lobbyists, an under-educated public, and a large political divide preventing change all inspired the Earth Day Network to remind the world what Earth Day is – and why it matters more than ever. They brought 250,000 people to the National Mall in D.C. for a climate rally, and launched the world’s biggest environmental service project, A Billion Acts of Green. That inspired  The Canopy Project, a global tree planting initiative that engaged 75,000 partners in 192 countries back in 2010, and has continued to make a significant impact on our global forests sense.

Today, Earth Day is considered the largest non-religious holiday observed worldwide, and is celebrated by over a billion people every year! From people choosing to celebrate the day enjoying nature with friends and family, to others who opt for a good ole’ fashioned peaceful protest, there are tons of ways to make an impact this holiday. Checkout some of our favorite Earth Day facts and initiatives below!

At EarthHero, we’re celebrating the day by teaming up with the organization that started it all – the Earth Day Network (founded by Denis Hayes!) to donate towards their amazing 2019 campaign called “Protect Our Species”. The entire week of Earth Day (4/22-4/29) we’ll be running a special promotion (stay tuned!) that gives you a chance to help us give back to their cause. Until then, support brands who are putting our environment first with some of our favorite eco-friendly products below! 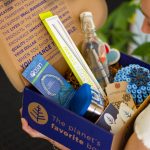 To celebrate the “Protect Our Species” campaign, we curated a custom gift box chock full of zero-waste, plastic-free products that directly or indirectly support happy habitats, species biodiversity, and sustainable ecosystems. Our oceans are one of our largest habitats, and host millions of unique species – but can be easily impacted by mounting environmental issues like plastic pollution and climate change. This gift box brings together products like reusable straws and food storage containers that reduce the amount of plastic you produce, with innovative products like the Cora Ball microfiber catching laundry ball. 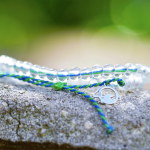 Every year, an estimated 16 billion pounds of plastic waste enters our oceans, where it damages habitats and hurts a variety of species. 4Ocean’s custom Earth Day Bracelet is on a mission to reduce the amount of plastic on our planet by making bracelets from recycled plastic and recycled glass – that also remove a pound of plastic from our oceans for every purchase. To date, 4Ocean bracelets have removed 2,246,704 pounds of trash from our oceans, and are just getting started! Plus, this bracelet is in support of the Earth Day Network, and donates a portion of profits to their numerous causes. Get one for yourself, and for a friend this Earth Day! 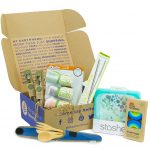 Want to share Earth Day with someone who is just getting started living more sustainably? Then this is the essential starter kit you need! It’s full of our favorite plastic-free essentials like reusable produce bags, silicone Ziplock alternatives, a bamboo utensil set, reusable straws, bamboo toothbrushes, and silicone food savers… aka all the essentials to get you creating less waste, and living more mindfully! They also come in size small and large, depending on what sustainable goodies you’d like to give or get! 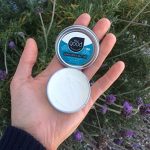 For many of us, Earth Day is an amazing reminder to get outside and enjoy nature – whether that means hiking, biking, swimming, diving, climbing… or just chilling. No matter what you decide to do, wearing a earth-friendly sunscreen is imperative to protect your skin, without harming the fragile ecosystems we love to play in. You can read more about why natural sunscreens are the way to go here, but make sure you opt for an oxybenzone-free, reef-friendly option like this one! 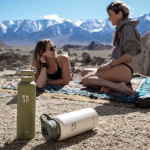 Plastic water bottles: they’re made of single-use chemical-laden plastic from oil, they’re mostly not recycled, and we add about 20 billion new plastic bottles to our landfills each year. Needless to say, the planet probably isn’t a huge fan of them. This Earth Day, make an effort to switch to a reusable bottle and kick single-use plastic to the curb! These insulated stainless steel bottles by Earthwell are leveling up on plastic bottles because they can keep drinks iced for 72 hours (that’s three days!), cold for 24 hours, and hot for 16 hours. Grab one and take it with you to any Earth Day celebration! And then… take it with you everywhere after that…. The planet will thank you.

Want to make an impact this Earth Day? Kate Williams, CEO of 1% for the Planet (which we’re proud to be a part of!) says that anyone can make a difference by simply incorporating little changes into your daily routine. “Read your labels, and require transparency from your favorite brands. Make a pledge to keep water clean and accessible for years to come. Commit to making an at-risk species your mascot, and become an advocate for that particular species. There are so many ways to make an impact – you just have to choose one!”, says Williams.

×
Log in to get your unique referral key!
Item Added to your Cart!
CONTINUE TO CART