What is plastic? We all know what plastic is, or do we? A lot of us like to think we already know everything there is to know about plastic, but the truth is that there is so much we don’t know. We encounter this material every single day of our lives (for the last century!), yet many of us don’t know exactly what plastic is… and the effects it can have on our health and environment.

In this article you will learn:

Why is plastic bad?

The Process of Producing Plastics

Step 1: Extraction of oil and natural gas! Plastic is derived from substances like natural gas, petroleum, and coal. It is composed of elements such as carbon, hydrogen, oxygen, nitrogen, sulfur, and chlorine. Other additives are included as well, most of which are toxic chemicals like lead, mercury, and benzene. These toxins are often synthesized in a lab, but in order to get the original organic elements, we must extract them from the Earth, which is anything but safe. Before extraction can occur, oil and gas must be found beneath the surface, a process which often involves seismic blasting! Seismic blasting works by sending loud noises at the ocean floor in order to listen to the resulting echoes, which will identify the presence of oil and gas. And since many animals depend on sonar for communication, seismic blasting is extremely harmful to marine life. 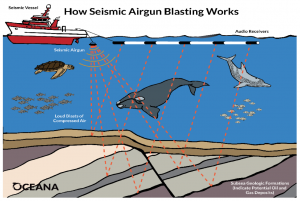 After seismic testing, the oil extraction process will commence with hydraulic fracking, which involves drilling a hole into the soil and injecting it with water, sand, and hazardous chemicals to dislodge the oil and natural gas from within the deep rock layers. There can be severe consequences to hydraulic fracking that range from water pollution to soil contamination to the proper health and functioning of our bodies. To learn more about the nitty gritty details of hydraulic fracking click here!

Another consequence of this process is that oil spills can occur, damaging surrounding ecosystems by polluting water and soil… which can both kill off wildlife and cause harm to humans. The most recent large scale spill was back in 2010 in the Gulf of Mexico and was devastating to the surrounding ecosystems – and smaller spills happen often.

Step 2: Transportation! Once the oil is extracted, pipelines, trains, trucks, and other methods of transportation are needed to move the oil, and can easily cause contamination of our groundwater when there are car crashes or leaks in pipelines, as well as releasing tons of CO2 emissions. These unforeseen outcomes (oil spills, environmental contamination) and excess carbon emissions are present throughout every step of the transportation process; from the fracking site to the oil refinery, from the refinery to plastic production facilities, and then finally from these facilities to the stores in which the plastic products are purchased.

Step 3: Factories and production! Before oil can be made into the plastics that you end up using, the oil must be stored, refined, sold to wholesalers, and finally manufactured into a usable product. Each of these steps requires lots of energy and contributes to greenhouse gases in our atmosphere. 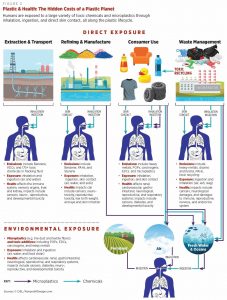 The Health Impacts of Plastic

Although plastics are used in nearly everything, there are very few regulations on the plastic industry as a whole, and up until recently, very few long-term studies analyzing the health and safety of the material. This is a huge problem for human health long-term because most plastics contain a variety of different chemicals, and each of these chemicals has the potential to impact our health in their own ways. New studies, regulations, and research is beginning to pop up around plastics – but many plastic products still contain these potentially harmful toxins. Below we’ll go over the 5 most common toxins in plastic products, and how these could be impacting your health!

2: Phthalates
Phthalates are probably the most widely known toxin, and are responsible for endocrine disruption, asthma, fetal development disruption, and fertility problems – all just from topical exposure. But this isn’t the only way phthalates work! When plastics containing phthalates are incinerated, as they often are in the medical field, dioxins and mercury are released into the air, and incinerated phthalates have been shown to cause cancer, birth defects, endometriosis, decreased fertility or infertility, and degradation of the immune system. Platelets are found in vinyl clothing, paint, printer ink, shoe soles, product packaging, food wrap, blood bags and medical tubing, surgical gloves, IV containers, labware, breathing tubes, and vinyl flooring. Phthalates are extremely harmful because they are not chemically bonded to other molecules in the plastic, which allows them to be more easily absorbed into skin and air. That awful plastic smell that often accompanies new plastic products comes from phthalates evaporating, so whatever you do, don’t sniff this! 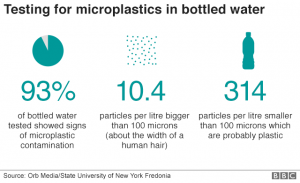 3 & 4: Polycarbonate and Polyethylene
Water bottles aren’t just wasteful – they also contain the harmful toxins polycarbonate and polyethylene. Polycarbonate can cause cancer, impaired immune system functioning, obesity, diabetes, early onset of puberty, and hyperactivity. Water and soda bottles also contain an additional carcinogen called polyethylene (#1PET), which is also found in carpet fiber, gum, coffee stirrers, plastic bags, squeeze bottles, and kitchenware. Simply put: polyethylene is the most popular plastic in the world, accounting for 34% of the total plastics market. While polyethylene does not contain BPA, when it is exposed to heat (or sun exposure) it can leach antimony, a toxic metalloid, into our food and beverages.

5: Polystyrene
Simply put, polystyrene is Styrofoam, and is found in meat and dairy containers, food containers, foam, packing peanuts, CD cases, insulation, ice buckets, floatation devices, and single-use drink cups. Polystyrene causes irritation to eyes, nose, and throat, unconsciousness, and dizziness. What’s even scarier about this chemical is that it is easily absorbed by our food and, when consumed, is then stored in our fat. Studies have shown that people work in industries where they are often exposed to polystyrene have significantly higher rates of lymphatic (immune system) cancer and hematopoietic cancer!

To make matters worse, when plastic ends up in landfills or is distributed as pollution, all of the toxins in it are able to leach into the soil and travel to our groundwater, where they can impact ecosystems and animals alike. And while recycling reduces the ability of plastic leaching, the recycling process has its own challenges like CO2 emissions!

How much plastic is used?

In 2019 so far, globally, we have already produced 348 million metric tons of plastic. And most of these tons of plastic are going straight to the landfill. In fact, studies back in 2015 showed that 55% of all plastic was used just once before tossed in the landfill, and only 19.5% of plastics were actually recycled. But, this recycling data is still much better than the global average since 1950 – which states only 9% of plastics in the last half century ever get recycled. Insane, right?

A part of this problem is that global governments and economic industries have not yet prioritized reuse and recycling as core values, relying instead on convenience, profit, and of course, plastic! The largest contributor to the plastic pollution problem is plastic packaging, which uses 146 million tons of plastic every year. This is followed by the building and construction industry, responsible for 65 million tons. Want some more scary statistics? Probably not but here are some anyways! 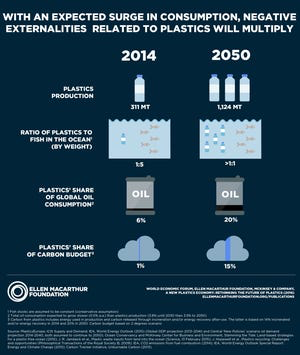 When plastic is not recycled, it either goes one of two places: our landfills, or our ecosystems (think oceans, waterways, forests, and everywhere else!) When the plastic collects in our ocean, it begins to form “garbage patches” – mostly caused by the natural circulation of the ocean forcing these plastics into circular spirals where they get stuck. There are now currently 5 large garbage patches, with the most notorious being the Great Pacific Garbage Patch, a massive trash island that is equal to two large landfills of waste. And while you may be picturing these garbage patch as large pieces of trash debris stuck together, the reality is that most of the plastic collected in these areas are microplastics.

Microplastics, aka tiny plastic pieces, are formed when larger plastic pieces begin to break down into smaller pieces, and are much more harmful because they can be easily ingested by marine wildlife, and can easily absorb those nasty toxins we mentioned above. Learn more about microplastics here!

How to Reduce Plastic Pollution

All right, we know we just threw a ton of not-so-positive information about the current state of plastic on our planet at you. But there are tons of things you can do to reduce your personal plastic waste, which will have a greater impact on our waste habits as a culture! The most important thing to keep in mind is to always be a conscious consumer – which means only purchasing mindfully, and with companies that make a different. Whether you’re shopping for snacks at the store, or purchasing a new mattress, be sure to shop products that are made to last, and made with the planet in mind.  The goal is not to be perfect, but to gradually change your buying habits over time to reflect the healthy lifestyle you want for yourself and our planet! Check out 7 ways to start ditching plastic in this blog!

One thought on “Why is plastic bad?”

Item Added to your Cart!
CONTINUE TO CART
×